The Promise of Friday Night 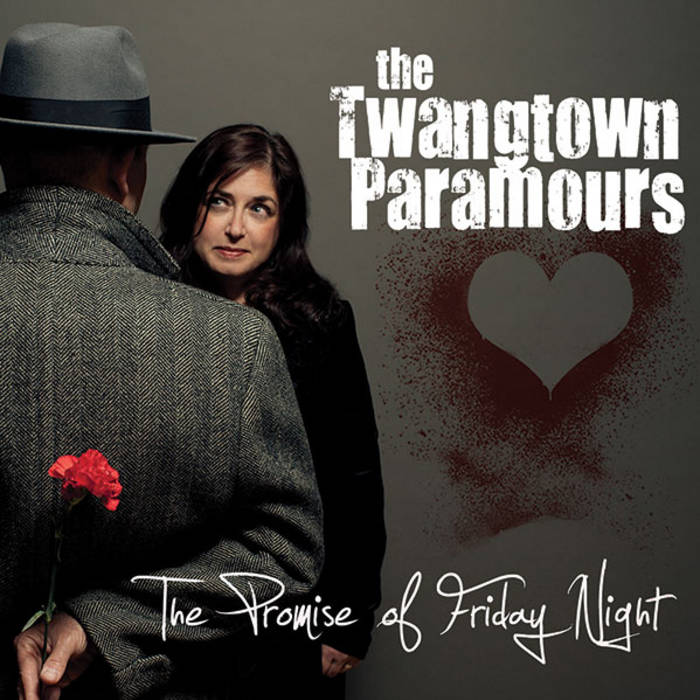 The Promise of Friday Night, the Twangtown Paramours’ second release, explores themes of second chances, struggle, and hope. Written and performed by Mike T. Lewis and MaryBeth Zamer, the twelve songs on the album are presented acoustically and produced eclectically. This collection of first person and character-driven stories invites the listener to take an intimate and moving trip with Mike and MaryBeth and to find humor and grace along the way.

From the coal mines of Appalachia (“Widow of the Mountain”) to the caverns of New York City (“The Promise of Friday Night”), with songs populated by doubtful lovers (“If I Fall for You”), agnostics (“Heaven is Somewhere Else”), insomniac policemen (“Chains”), and ghosts (“Who Needs Flowers When You’re Dead”), the duo takes you on an everyman’s journey of heartache, tragedy and perseverance. Like the narrator in the album’s title song, the Twangtown Paramours conclude that if you take risks and are brave enough to keep yourself open, the possibilities are endless.

Recorded at Inside Edge Studios in Nashville and produced by Mike T. Lewis, all tracks on The Promise of Friday Night are enhanced in a variety of musical and sometimes unique ways. A few productions contain sparse instrumentation, others are percussive, featuring bouzoukis, washboards and frying pans; others approach the semi-symphonic. Guest musicians are all top-notch players on the Nashville and national scenes and include Rick Lonow on percussion and drums, Jay Vern on piano, Gary DiBenedetto on dobro, and Jim Van Cleve of Mountain Heart on violin and viola.

This album is dedicated to our family, and to our friends, new and old, who have supported our music. Special thanks to Arthur Taplinger, Millicent Pine, Jerre and Barbara Haskew, Greg Trafidlo, Kari Estrin, Susie Keat, Georgeanne Olive, Caroline Aiken, Dalis Allen,Howard and Fran Schuster, Susan Taplinger, Molly Woulfe, Mike Stillman, Ellen Pryor, Stacey Eidson, Ellen Reinstatler, David Wozniak, Bill and Paula Nedela, Jeff Waggenheim, David Hammond and Jeanie Putnam, Lynda Barry, Jimmie and Janet Gilmore, Amy Speace and the folks at the East Nashville Song Salon, Tom Marshall at North Mountain Digital, Curt Perkins, all the wonderful DJ’s who play our music on their radio shows, all the venue operators and house concert hosts who hire us, the great musicians who played on this album, and Alex and Olivia for putting up with all the late night recording sessions.

The Promise of Friday Night, the Twangtown Paramours’ second release, explores themes of second chances, struggle, and hope. Presented acoustically and produced eclectically, this collection of first person and character-driven stories invites the listener to take an intimate and moving trip with Mike and MaryBeth and to find humor and grace along the way. ... more

Bandcamp Daily  your guide to the world of Bandcamp

Interviews With Butcher Brown and Slauson Malone, plus LP of the week by SAULT.